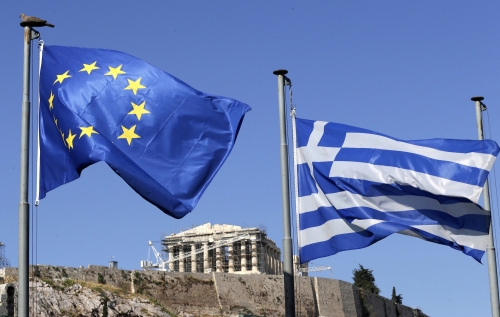 On August 8, the EU’s European Stability Mechanism disbursed a €15 billion tranche from its €86 billion three-year program of financial assistance for Greece and on August 20 concluded the program, the last of three bailouts provided by the member states of the euro area, the ESM and a predecessor organization, and the IMF since May 2010.

The bailouts are over. But the consequences—a staggeringly high level of debt and an economy that has gone through a full-scale depression and, after more than eight years and despite many people dropping out of the active labor market and many others emigrating, still has an unemployment rate of 20 percent—remain and will be with Greece for years to come.

The opening act in the long-running Eurozone drama began after the October 2009 election when the newly-elected PASOK government headed by George Papandreou announced that the country’s budget deficit would not be equivalent to 5 percent of GDP, as the previous government had promised, but 12 percent. The markets reacted predictably; bondholders sold their holdings in large quantities, the prices of Greek bonds dropping precipitously and, as bond prices plummeted, the yields—the ratio of the coupon rate to the current price and the baseline for new borrowing—soared.

By the Spring of 2010, it was clear that Greece would be unable to raise in the markets what it needed in order to cover its deficit—by then equivalent to 15 percent of GDP—and service its existing debt without paying a prohibitively high interest rate and would default on imminent debt repayments. After an intense debate within the Eurogroup—the finance ministers of the euro area—about whether Greece should be told to go to the IMF or, on the other hand, the euro area countries themselves should provide the assistance it needed, the euro area members agreed to lend Greece €80 billion in bilateral loans over three years, in addition to which the IMF would lend it €30 billion. Soon thereafter, the euro area members decided to create the European Financial Stability Facility (EFSF) to assist any member of the euro area needing financial assistance in the future.

By 2011, it had become apparent that Greece would need more assistance and in July 2012 a second three-year program of financial assistance was agreed in which the EFSF would provide an amount equivalent to the funds not yet disbursed from the 2010 program—€27 billion from the euro area members’ Greek Loan Facility and €10 billion from the IMF—plus €130 billion. The IMF for its part agreed to provide €20 billion from the four-year €28 billion Extended Fund Facility it had approved in March 2012.

An important new element in the second bailout was the insistence that the private sector bondholders agree to a restructuring of Greek debt that would reduce its overall debt burden by reducing the value of their holdings. The restructuring, known colloquially as a “haircut,” involved a voluntary exchange of bonds held by private-sector investors for EFSF bonds of varying maturities. In March 2012, about 97 percent of privately-held bonds—about €197 billion—were exchanged for about €90 billion in EFSF bonds, resulting in a 53.5 percent reduction in the face value of the bonds and a reduction of approximately €107 billion in the Greek debt. The bondholders who accepted the “haircut” obviously figured that 50 percent of something was better than 100 percent of nothing, which is what their bonds would have been worth if Greece were to default.

With the 2012 program scheduled to conclude in early 2015, it soon became apparent that Greece would need yet another program of financial assistance. In a negotiation greatly complicated by the formation in January 2015 of a coalition government led by the far-left Syriza party headed by Alexis Tsipras that was adamantly opposed to the fiscal conditions attached to, and economic consequences of, the first two bailouts, after teetering on the edge of “Grexit”—a withdrawal from the euro area—Greece and the EU agreed in August 2015 to a third three-year program of assistance in which the ESM would lend Greece a total of €86 billion.

As it turned out, Greece didn’t need the full €86 billion and the 2015-18 program was concluded on August 20 after €62 billion had been disbursed.

In all, the members of the euro area, the EFSF, and the ESM disbursed a total of €257 billion to Greece from May 2010 through August 2018. Of that amount, €53 billion was lent by the euro area members (except Slovakia, which refused to participate in the Greek Loan Facility, and Ireland and Portugal, which soon dropped out after receiving bailouts themselves in the Fall of 2010 and Spring of 2011), €142 billion was lent by the EFSF and €62 billion was lent by the ESM. The IMF provided Greece with a total of €32 billion, €20 billion as part of the first program and €12 billion as part of the second. Together, the participating euro area countries, the EFSF, the ESM, and the IMF provided Greece a total of €289 billion, by far the largest bailout ever provided any country.

The bailouts were, of course, accompanied by a number of fiscal and economic conditions. The euro area members, the EU institutions and the IMF insisted on sharp reductions in government spending, increases in various forms of revenue, and reductions in the aggregate budget deficit. By 2016, Greece had turned a double-digit deficit into a slight surplus and the budget registered a slight surplus again last year and is expected to do the same this year.

After remaining stagnant in 2014-16, the Greek economy finally registered a modest degree of growth—1.7 percent—last year and is expected to grow by 1.9 percent this year and 2.3 percent next year. But the unemployment rate, which has been gradually dropping from the high of 27.5 percent in 2013, was still over 21 percent last year and is expected to be 20.1 percent this year. It is expected to drop below 20 percent next year for the first time since 2011 but, at 18 percent, will still be substantially higher than in any other member state.

If the consequences of the long fiscal contraction remain evident in the unusually high rate of unemployment, even after the exit of many Greeks from the active labor market and, indeed, from the country, the consequences of the three bailouts also remain evident after the conclusion of the third bailout. One of the most important consequences is the obligation to run a substantial primary budget surplus—that is, a budget surplus before payment of interest on debt. Such surpluses are, by definition, contractionary; they occur when government spends less than it takes in through revenues. In 2016, Greece ran a primary surplus equivalent to 3.9 percent of GDP, last year it ran one of 4.0 percent, and this year it is expected to run one of 3.7 percent. It is obliged to run a primary budget surplus of 3.5 percent of GDP until 2022 and around 2 percent thereafter. For the foreseeable future it will continue to be subject to “enhanced surveillance” by the European Commission and the ESM will not only participate with the Commission in that surveillance but will monitor Greek fiscal policy under its Early Warning System to ensure that its loans will be repaid.

Beyond the sustained contractionary effect of Greek fiscal policy in the near term, perhaps the more important consequence of the bailouts is that the EU institutions are now, and will be for decades to come, by far Greece’s major creditors. As of today, Greece owes a total of €191 billion to the EFSF and ESM—an amount that is greater than the country’s GDP. Together, they hold well over half of the central government’s debt. Because of the bailouts, the country’s debt-to-GDP ratio has increased substantially over the past eight years; whereas in 2009, it was 127 percent, by 2016 it had reached 181 percent of GDP. It is expected to be about 178 percent of GDP this year—a ratio that is not only far above the stipulated maximum ratio allowed for participants in the euro area (60 percent) but also far above the ratio of any other EU member state. (The next highest is Italy with an expected debt-to-GDP ratio this year of 131 percent.)

What makes the substantially greater amount of debt tolerable, of course, is the fact that the EU debt has long maturities, low interest rates and amortization schedules that defer for years, even decades, the payment of interest and principal on much of the debt. Thus, for example, the EFSF loans are currently scheduled to be repaid from 2023 to 2056 and the ESM loans will be repaid from 2034 to 2060. In June, the Eurogroup agreed to medium-term debt relief measures that will extend the weighted average maturity of nearly €100 billion of EFSF debt by 10 years and agreed to review again in 2032 whether additional debt relief measures are needed. Taken together, these measures make what would seem to be an unsustainable level of debt manageable. But the side effect of the measures to stretch out the maturities, lessen the interest rates, and defer payments of interest and principal is the acceptance of EU oversight and EU-imposed constraints on fiscal policy for decades to come.

The bailouts have ended. But Greece will be living with the after-effects for a very long time.