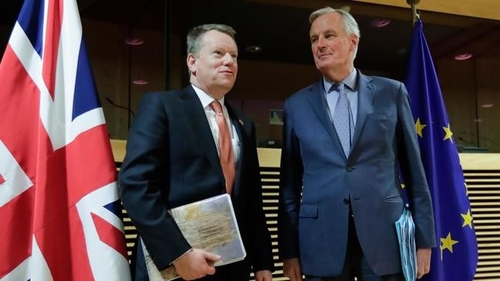 Today the European Union and the United Kingdom began negotiating their future relationship. Roughly 100 British officials, led by David Frost, the UK’s chief negotiator, and Sir Timothy Barrow, the UK’s ambassador, arrived at EU headquarters for four days of intensive negotiation in the first of several rounds scheduled over the next four months. Ten separate groups of British and EU officials will simultaneously negotiate the full range of topics under consideration—trade in goods, trade in services, fisheries, level playing field, governance and dispute settlement, etc.

But despite the proverbial full-court press, whether the EU and UK will succeed in negotiating an “ambitious, broad, deep and flexible partnership across trade and economic cooperation with a comprehensive and balanced Free Trade Agreement at its core” as they agreed in October in the Political Declaration that set out the framework for their post-Brexit relationship—and whether they will do so in time to avoid a no-deal departure of the UK from the EU’s internal market and customs union when the transition period ends at midnight on December 31—is not at all certain. Indeed, given the complexity of the issues involved and the extent of divergence in their positions on many of them, it’s quite possible that on the first day of 2021 the UK will not only find itself no longer in the EU’s internal market and customs union but also without a trade agreement with the EU, which is, by far, its largest trade partner.

It is of course to be expected in the run-up to an exceptionally difficult negotiation that the parties would seek to maximize their leverage by emphasizing publicly that their positions on various issues are absolutely non-negotiable. British Prime Minister Boris Johnson has certainly done that, beginning with his speech in Greenwich on February 3, and the EU’s chief negotiator Michel Barnier has done the same in several statements, speeches, and press conferences over the past four weeks. But perusal of the 45-page “Directives for the Negotiation of a New Partnership,” prepared by the Commission and made public on February 3 and, after a few minor revisions, approved and released by the EU’s General Affairs Council last Tuesday in authorizing the opening of the negotiation, and of the 36-page document entitled “The Future Relationship with the EU: The UK’s Approach to Negotiations” that Johnson presented to Parliament last Thursday suggests the divergent positions of the EU and UK are not just the normal pre-negotiation posturing. Instead, they reflect profound differences between the parties—differences so profound as to make it quite unlikely they will succeed, in less than ten months, in negotiating the “ambitious, broad, deep and flexible partnership across trade and economic cooperation” described in last October’s Political Declaration.

One of the most important issues dividing the parties involves the EU’s insistence on “a level playing field” in a number of domains of policy. In describing the envisaged partnership, the Council states it “should include an ambitious, wide-ranging and balanced economic partnership, insofar as there are sufficient guarantees for a level playing field so as to uphold corresponding high levels of protection over time.” The partnership should “be underpinned by robust commitments ensuring a level playing field for open and fair competition….as well as by effective management and supervision, dispute settlement and enforcement arrangements.” Lest the point be missed, two paragraphs later, in describing the objectives and principles of the envisaged partnership, the Council says yet again it “should contain comprehensive arrangements including a free trade area, with customs and regulatory cooperation…underpinned by robust commitments ensuring a level playing field for open and fair competition.” And it repeats the point in the next paragraph, saying “the envisaged partnership should aim at establishing a free trade area ensuring no tariffs, fees, charges having equivalent effect or quantitative restrictions across all sectors provided that a level playing field is ensured through robust commitments…”

At a later point, in a section entitled “Level Playing Field and Sustainability,” the Council states that “Given the Union and the United Kingdom’s geographic proximity and economic interdependence, the envisaged partnership must ensure open and fair competition, encompassing robust commitments to ensure a level playing field. These commitments should be commensurate with the scope and depth of the overall envisaged partnership and the economic connectedness of the Parties. These commitments should prevent distortions of trade and unfair competitive advantages so as to ensure a sustainable and long-lasting relationship between the Parties. To that end, the envisaged agreement should uphold common high standards, and corresponding high standards over time with Union standards as a reference point, in the areas of State aid, competition, state-owned enterprises, social and employment standards, environmental standards, climate change, relevant tax matters and other regulatory measures and practices in these areas. In so doing, the agreement should rely on appropriate and relevant Union and international standards. It should include for each of those areas adequate mechanisms to ensure effective implementation domestically, enforcement and dispute settlement, including appropriate remedies.”

Finally, the Council says the envisaged partnership “should be embedded in an overall governance framework covering all areas of economic and security cooperation” and “should establish a governing body responsible for managing and supervising the implementation and operation of the envisioned partnership” and “should include appropriate arrangements for dispute settlement and enforcement.” The governing body “may, where applicable, agree to refer the dispute to an independent arbitration panel at any time…. The decisions of the independent arbitration panel should be binding on the Parties. Should a dispute raise a question of interpretation of Union law…the arbitration panel should refer the question to the Court of Justice of the European Union as the sole arbiter of Union law, for a binding ruling. The arbitration panel should decide the dispute in accordance with the ruling given by the CJEU.”

Not surprisingly, the UK strenuously objects to many of these provisions (and others as well)—despite the fact that many of them reiterate positions that were agreed in last October’s Political Declaration. In the document presented to Parliament last Thursday, the government stated that its vision is one “of a relationship based on friendly cooperation between sovereign equals, with both parties respecting one another’s legal autonomy and right to manage their own resources as they see fit. Whatever happens, the Government will not negotiate any arrangement in which the UK does not have control of its own laws and political life. That means we will not agree to any obligations for our laws to be aligned with the EU’s, or for the EU’s institutions, including the Court of Justice, to have any jurisdiction in the UK.”

The government made it clear that it will not extend the transition period that ends at midnight on December 31 and is committed to working quickly between now and the high-level meeting of the Parties in June agreed in the Political Declaration in order to take stock of progress in the negotiations. It said it hopes that, by that point, the broad outline of an agreement would be clear and be capable of being rapidly finalized by September. But it also said that “if that does not seem to be the case at the June meeting, the government will need to decide whether the UK’s attention should move away from negotiations and focus solely on continuing domestic preparations to exit the transition period in an orderly fashion.”

Boris Johnson has frequently said that he wants a Free Trade Agreement similar to the EU-Canada Comprehensive Economic and Trade Agreement (CETA). But he seems to be blissfully unaware that, although Canada had, prior to the negotiation of CETA, a far less complicated economic relationship with the EU than the UK has, it took the EU and Canada more than five years—from May 2009 to August 2014—to negotiate CETA, which is more than 1,600 pages in length (with another 600 pages of annexes). It seems quite delusional to imagine, in light of the much more intertwined economic relationship than exists between the EU and the UK, relative to that which existed between the EU and Canada in 2009, and the number of exceptionally difficult and contentious issues that must be addressed—in addition to those involving the maintenance of a level playing field going forward, the governance arrangements for the Agreement, and the dispute settlement mechanism, issues ranging from fishing rights in UK waters and sales of the catch in EU markets to the creation of cooperative regulatory arrangements in regard to EU equivalence decisions involving British financial services—that the EU and UK will be able to negotiate an Agreement over the next ten months.

They may, of course, surprise us. But at the risk of sounding like Eeyore, there’s a very good chance that, unless Boris Johnson changes his mind and asks the EU to extend the transition period for another year or two by July 1, as is allowed in the Withdrawal Agreement, at midnight on December 31 the UK will go over the cliff-edge in a no-deal exit from the EU’s internal market and customs union and face the grim prospect of doing business with its most important trading partner on WTO terms.