After lengthy and heated debate about responses to pandemic, EU leaders delay action 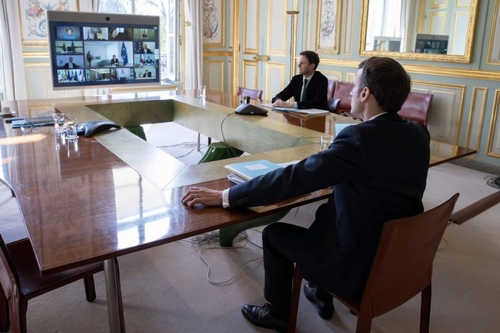 Yesterday the European Council, the heads of state and government of the European Union, met via videoconference for the third time in less than three weeks to discuss the EU’s response to the COVID-19 pandemic. Meeting a week after the European Central Bank announced a new Pandemic Emergency Purchase Programme (PEPP) under which it will purchase up to €750 billion of private and public securities this year; after the German government on Monday approved a €750 billion emergency package that will fund a supplemental budget of €123 billion and a new €500 billion bailout fund and will require additional borrowing equivalent to 10 percent of Germany’s GDP; after the Eurogroup, the finance ministers of the euro area member states, met Tuesday in a two-hour telephone meeting and broadly supported using the resources of the European Stability Mechanism, which has €500 billion available to support euro area member states needing financial assistance; and a day after nine EU leaders endorsed the creation of a common EU debt instrument that could be used to fund a broad EU-wide response to the pandemic, many hoped, and indeed expected, the European Council, rather than repeating yet again the by-now clichéd phase that “we’ll do whatever it takes” and doing nothing, would actually do something.

But unfortunately for Europe that didn’t happen. After meeting for more than five hours in an at-times acrimonious discussion of both the Eurogroup idea of using the ESM and the nine leaders’ proposal to create an EU-wide debt instrument, the European Council did nothing other than reiterate yet again the by-now hollow phrase, “we will do everything that is necessary to protect our citizens and overcome the crisis,” and, after taking note of the work of the Eurogroup, invited it to present proposals to the Council within two weeks.

On March 10, as the numbers of Europeans infected with, and dying of, the coronavirus continued to rise accelerating rate, the European Council met by videoconference and, contemplating the magnitude of the likely adverse consequences of the crisis on the European economy, called upon the European Commission to be flexible in its application of the EU’s fiscal rules. Several days later, immediately after European Central Bank President Christine Lagarde, in announcing a comprehensive package of monetary policy measures to provide euro area member states with additional liquidity support, said the response to the crisis must be “fiscal first and foremost” and called upon the EU governments to pursue an “ambitious and collective fiscal response,” European Commission President Ursula von der Leyen said the Commission would adopt a position of “maximum flexibility” in regard to the application of the EU’s rules pertaining to state aid for firms and the Stability and Growth Pact, which limits the euro area member states to a budget deficit of 3 percent.

On March 16, the Eurogroup agreed that an “immediate, ambitious and coordinated policy response is needed” and put together “a first set of national and European measures while setting a framework for further actions to respond to a rapidly evolving crisis.” The ministers decided on fiscal measures at national and European levels equivalent to about one percent of GDP on average and liquidity measures consisting of public guarantee schemes and deferred tax payments that amount to about 10 percent of GDP. They also agreed the governments would allow automatic stabilizers to function fully, regardless of their budgetary impact, and would implement all necessary measures to ensure that the economic consequences of the pandemic are tackled; that, to the extent required, the governments would implement temporary measures such as immediate spending aimed at containing and treating the disease, liquidity support for firms facing severe disruption and liquidity shortages and support for affected workers; and that they would make full use of the flexibility that exists in the Stability and Growth Pact, meaning that automatic revenue shortfalls and expenditure increases resulting from the expected economic downtown wouldn’t affect compliance with the Pact and temporary fiscal measures taken in response to the crisis would be excluded when assessing compliance with the EU’s fiscal rules and requirements. And they welcomed the Commission’s readiness to activate a general escape clause that would allow further discretionary spending as well as its guidance on the scope for supporting firms that is available within state aid rules under the current circumstances. In concluding, they said, “We will take whatever further coordinated and decisive policy action is necessary, including fiscal measures, to support growth and employment.”

On March 17, in another videoconference, the European Council endorsed the Eurogroup’s statement, invited it to “continuously and closely monitor economic and financial developments and to adopt without delay a coordinated policy response to the rapidly evolving situation,” and expressed its support for the various initiatives taken by the Commission, including the adaptation of the state aid rules and the use of the flexibility provided for in the Stability and Growth Pact. In concluding, it said, “The Union and its Member States will do whatever it takes to address the current challenges, to restore confidence and to support a rapid recovery, for the sake of our citizens.”

But by the end of last week, it had become apparent to the leaders of many of the member states, especially those most hard hit by the pandemic, that even more was needed. Last Friday, Italian Prime Minister Giuseppe Conte called on the EU to use the “full firepower” of its European Stability Mechanism, which has €500 billion available to support euro area member states needing a bailout. And on Monday, Spanish Prime Minister Pedro Sánchez called on the Eurogroup to come up with a “big Marshall plan – a big public investment plan” for the EU.

On Tuesday, Mário Centeno convened a videoconference of the Eurogroup and finance ministers of the non-euro area countries. In a letter to European Council President Charles Michel after the two-hour meeting, Centeno noted that, after taking stock of what had been done, the ministers made progress on additional forms of support that could be made available. In particular, he said the ministers had “broadly agreed” that the resources of the ESM should contribute to the coordinated response and there was a “readiness” to use the ESM, as needed, given the external, symmetric nature of the COVID-19 shock. Specifically, he said there was “broad support” to make a “Pandemic Crisis Support safeguard” available, within the provisions of the ESM Treaty, building on the framework of the existing Enhanced Conditions Credit Line. The ministers were, he said, “in broad agreement” that Pandemic Crisis Support is a relevant safeguard for any ESM member affected by the pandemic. There was also “broad agreement” that significant resources should be allocated to Pandemic Crisis Support, with a “benchmark” allocation to a member state of around 2 percent of its GDP, which could be adjusted depending on the development of the pandemic. Of course, the terms “broad support” and “broad agreement” were euphemisms for saying there was not complete support and agreement and, indeed, the ministers of certain member states – most notably, those of Germany, Austria and the Netherlands – vigorously objected to the proposal and insisted, in opposition to the French, Spanish, and Italian ministers, that the conditionality provisions of the ESM would have to remain in effect.

While making the resources of the ESM available to the member states in order to address the economic consequences of the pandemic is an important step, a number of states, especially those which have been hardest hit by the virus, objected strenuously to the modest benchmark. After all, on Monday the German government approved a €750 billion emergency package that will be funded in part by an additional borrowing equivalent to 10 percent of its GDP. So it was not at all surprising, then, that on Wednesday nine leaders – French President Emmanuel Macron, Italian Prime Minister Conte, Spanish Prime Minister Sánchez and the leaders of Belgium, Luxembourg, Ireland, Greece, Portugal, and Slovenia wrote a letter to Michel and called for a “coordinated response at the European level.” That, they said, requires “the activation of all existing common fiscal instruments to support national efforts and ensure financial solidarity, especially within the eurozone. In particular, we need to work on a common debt instrument [bold font in the letter] issued by a European institution to raise funds on the market on the same basis and to the benefits of all Member States.” The case for such a common instrument, they said, is strong because they are all facing a symmetric external shock for which no country bears responsibility but whose negative consequences are endured by all. The funds, they said, “will be targeted to finance in all Member States the necessary investments in the healthcare system and temporary policies to protect our economies and social model.” In addition, they suggested “we could explore other tools like a specific funding for Corona-related spending in the EU budget” for at least 2020 and 2021 [bold font in letter].

After receiving the letter, Michel said that at yesterday’s European Council videoconference, the leaders would discuss a “Marshall Plan-like” stimulus package to deal with the effects of the crisis on the European economy. It would, he said, be “an intra-European plan which must mobilize EU capital in a framework of the European budget; which must mobilize national funds and which should also mobilize the private sector…. We will have to use all the tools.” But, as it turned out, that was perhaps wishful thinking. (Michel’s successor as Belgium’s prime minister, Sophie Wilmès, was one of the nine leaders who wrote to him on Wednesday.) After discussing – at times heatedly, with a predictable division between the French, Spanish and Italian leaders and their supporting colleagues, on one hand, vs. the German, Dutch and Austrian leaders and their supporting colleagues, on the other hand – the alternatives put forward by the Eurogroup Tuesday and the nine leaders Wednesday for more than five hours, the European Council issued a joint statement that said only that the leaders “fully acknowledge the gravity of the socio-economic consequences of the COVID-19 crisis and will do everything necessary to meet this challenge in a spirit of solidarity.” They went on to say, “We take note of the progress made by the Eurogroup. At this stage, we invite the Eurogroup to present proposals to us within two weeks…Our response will be stepped up, as necessary, with further action in an inclusive way, in light of developments, in order to deliver a comprehensive response.” In other words, they did nothing.

Speaking in the House of Commons on June 18, 1940, two days after France asked Germany for an armistice, Prime Minister Winston Churchill, preparing the British people for what lay ahead, said, “Let us therefore brace ourselves to our duties, and so bear ourselves, that if the British Empire and its Commonwealth last for a thousand years, men will still say, “This was their finest hour.” That will never be said about yesterday’s European Council meeting.

David R. Cameron is a professor of political science and the director of the European Union Studies Program.